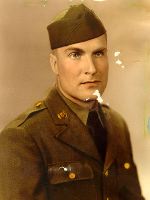 Well, I'm across the deep blue ocean now and still alive and feeling well and cheerful and well fed. We are camped by a city of unknown size as to population, but it has what looks like some modern buildings and mills in it and some mighty scrubby people. Not all of them, I'm told up town they look clean and educated, but the gang we see the most of could easily have come out of the book Mother India.

Through our field glasses we can see the funerals that are held in a cemetery close to camp. A large group of mourners, all moan together making a sound like donkeys braying. Then they up-end the coffin, the stiff slides into the grave raw. The mourners take the coffin and walk back singing and laughing.

Well, I made the Atlantic without getting seasick, mostly because we had good weather, I guess, and the first few days we were here we lived on iron rations and liked it well. So as long as it is possible to get tin cans to us, we will not lose weight, but the stuff that the Navy dished out to us was fierce. The coffee, I believe, was made from salt water with enough sugar added to kill the taste. Otherwise we had a pleasant journey.

Don't worry too much. I'll land buttered side up, usually do.

Have now got two letters from you and have written only the one, the one I wrote from censored, and have never taken time to write any since, but will now try to do better.

I'm in good health and all in one piece. The way it worked out, I took active part in the battle for only about four hours, although was where I could be shelled, bombed and otherwise shot at steady for four days, and more or less for a week. It didn't bother me any, I have got more scared chasing the cows home from the pasture.

Their Stukas can't hit anything smaller than a forty. You can tell just about where a shell will land. Their snipers must shoot with both eyes closed, but the machine gunners, I found out, are plenty good and when I hear a trench mortar coming, I say, "Move over, boys, I'm coming!" and the nearest gopher hole finds itself fitting me in nothing flat.

We're idle now and believe the war in Africa is over as far as we are concerned and will let you know in a couple of days if we have to take part in another battle.

So, be of good cheer until you get my next letter. You know that I always land buttered side up.

How are you folks? Hope that the store and the family and everything have all been doing well. For the last few days I have been in to town with Efford to visit his cousin who was hurt in Tunisia. He is almost well enough to leave now. These towns in Africa are all the same -- smelly and dirty, full of crooked streets that go up and down. But they have a good Red Cross here with shows all afternoon and evening and lots of indoor sports and amusements, so I spend most of my time there.

Hope to hear from you soon.

Have not heard from you for some time now, but expect you have been very busy, what with canning and so on, and I suppose there has been a lot of work at the store, too, with help being short and a lot of red tape with this rationing and all that sort of thing.

Hope that you have all gotten through the summer in good health and not suffered too much from the heat. As for Billy joining the Air Corps by way of looking for adventure, tell him to take it slow, as he will find along with everyone else, that adventure is the smallest part of any branch of the service, disagreeable work making up most of the time.

As for me, I'm feeling real well and quite content as so far nothing has happened to cause me any grief and never was so optimistic that when things didn't go so well that I was caused any disappointment.