received by Neta Anderson in 2008

This is the history of a young Norwegian woman who left her home in Norway to become a pioneer in Dakota Territory. When Petronelle Rosedahl married John Molstad in 1868 in Norway, she was not destined to spend her married life in her native land. She had been born there August 9, 1848 and at nineteen years of age she had a husband who desired to emigrate form Norway to make a home in America.

Who can realize the mixed emotions she must have had when her husband made that decision? He, too, was a citizen of Norway, having been born there March 25, 1842. But they didn't have sufficient money for both passages across the ocean. A decision was made that he go first, earn the necessary amount for her fare and then send it to her so she could come later.

So to America he sailed in 1867 [the 1900 Census lists this date as 1862]. He went to Canada first then to Wisconsin where an uncle lived. There he worked to earn money for his wife's passage. She arrived here two years later in 1869 [the 1900 Census lists this date as 1863]. Mr. and Mrs. John Molstad were fortunate that they immigrated to America before the thousands of migrants from Norway and Sweden who came in the 1880s.

Mr. Molstad's ambition was to farm the land, so he and his family moved to Decorah, Iowa, and later to Watonwan County, Minnesota near St. James. There was a big judgment on available land there, so they decided to migrate farther west. Mrs. Molstad had a sister [Amalia Quickstad] and family in Dakota Territory so that became their destination. The husband, wife and five children made the ten-day trip in a covered wagon drawn by oxen. They arrived in Deuel County [South Dakota] on May 29, 1880. Their possessions were one cow and twenty-five cents.

The family lived with this sister until they were able to get a relinquishment of 160 acres located two miles west and 3/4 miles north of Toronto [South Dakota]. This town hadn't been sited or named yet.

The mother helped her husband build a one-room sod dugout which was their house. There more children were born while they lived in it. This made a very comfortable home for her husband and eight children. Even the snakes found it inviting as they would peek from their holes in the walls. It was built near a stream, so shallow wells provided sufficient water. This dugout was used for a chicken house when a new house was completed. They remained here and proved up the land. It was not a tree claim so the mother helped the father plant a very large grove of trees which is still in good condition.

This mother's early days were typical of all pioneer mothers. She stayed at home caring for her family while the father walked to Candy and Gary (approximately 25-30 miles) carrying a sack of wheat on his back to be ground into flour. Friends had given the wheat to them for this purpose. The mother and children also used a coffee mill to grind flour.

With a few jobs here and there that first summer he was able to provide for his family. He also managed to break fifteen acres of land which was planted to wheat the next summer. It was cut with a scythe and threshed with a flail. It yielded very well so that gave the family their initial start in grain farming which was the family's main income during their farming years.

In 1883, they purchased a seeder and binder which assisted them greatly. The coming of the railroad to Toronto in 1884 was another great asset. The crops suffered no prairie fires and very little grasshopper damage. 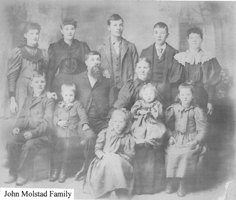 This pioneer mother and the children helped the father and the family prospered. A good set of buildings was built and a large frame house was exchanged for the sod hut. This was absolutely necessary as the eight children had increased to eleven: four sons and seven daughters. Children were a necessity in pioneer times when all work had to be done by people and horses. The family never owned a car and tractor until the children were all grown. Transportation was by wagons and buggies drawn by horses.

A pioneer woman's activities outside the home were centered in the church. The family attended a rural Lutheran church known as the Blom Prairie Free Church located about two miles form their home. Before the church was built services were held in the homes so Mrs. Molstad's home as always available. Ministers and students were welcome to stay there when they traveled through the area. Parochial school teachers stayed with the family when they taught religion for a few weeks during the summers. Since the church was in easy walking distance, the family walked to the services. Family members took turns as janitors and two daughters, Elvina and Lena, served as organists. The family had an organ at home.

On one cleaning occasion, the girls were playing the organ and singing at the top of their voices when the head of a tramp appeared at an open window. The girls hurriedly left the church and ran all the way home as quickly as they could. When the mother discovered thy had run away without closing the doors she scolded them severely. Tramps, hobos, and peddlers walked form farm to farm and this mother never let them go away hungry. If they had to stay all night, they slept in the hay barn.

What a busy mother she must have been assisting these eleven children so they could get to school on time! They had to walk one and 1/2 miles to the Mikkelson School which they all attended while it was in session.

The mother and the daughters did the chores and milked the cows much like she had been accustomed to doing in Norway. The sons helped with the field work. During those earlier years flax straw was used for stove fuel. It had to be twisted and put in a stove pipe with a weight so it would fall into the stove. Besides assisting with this the mother was kept very busy preparing all the food and making clothing for the family. Everything had to be made in the home. With seven daughters one can visualize all the dresses and garments that had to be made by hand. She taught her daughters to sew and all became good seamstresses. She knew how to knit and so made the stockings for the family. The latter became a painful incident when she sat down on the point of a knitting needle which had been left on a chair. This caused sore feelings in more ways than one!

Besides cooking, sewing and washing for her family of thirteen the mother was willing to do this for one more person. A cousin living in Norway wished to come to the United States. He didn't have money for passage so the Molstad family sent him that amount. He came and stayed with the family until he filed on a claim of his own. 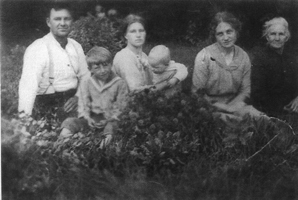 With so many people in one household and so much assistance from them, one is led to believe all couldn't be kept busy. So as the daughters became older and efficient in the arts of housekeeping, the mother allowed them to "work out" in the community. This gave them an outlet for their skills and reflected good raising by the mother. The first death in the family occurred when the oldest daughter, Josephine, became ill and died of typhoid fever while working for a family in Toronto. She was twenty-one years of age at that time. This was the only type of work available to women. As the daughters reached womanhood they attracted eligible young men living in the neighborhood. Like many mothers, Mrs. Molstad wasn't too anxious for these suitors, but nevertheless, they came and the older girls married.

Petronelle Molstad's husband passed away June 22, 1910 at the age of 68. The mother continued to live on the farm keeping house for the two sons who farmed the land until it was rented to a son-in-law and his wife Nettie. The mother, daughter and two sons moved to the upstairs apartments. It was difficult for the mother to leave the farm where she and her pioneer husband had homesteaded and lived for 35 years. But in 1916 she decided to sell. She bought a house in Toronto and she, her daughter, and two sons moved there.

Even in 1916, modern facilities were scarce in rural areas so she never had the convenience of running water, bathroom and electrical appliances. She did have electric lights in town, but didn't particularly enjoy them. Members of her family would find her with a lighted kerosene lamp on the table and she would be seated beside it reading or sewing.

Her youngest daughter stayed with her until she married in 1920. The mother continued to live there, keeping house for the two sons until May 29, 1928. She was buried beside her husband in the Blom Prairie Free Cemetery three miles west of Toronto. Five of her children are buried near her.